While I believe it is a distinct "third way" of creating literary art, I am a hearty supporter of what I once called "propago" (note: several of the links in that article are now dead) and what we easily recognize as comics, comix, graphic novels, etc. but less easily recognize as "visual poetry" as lauded by folks at Ubuweb, etc.. I have argued frequently that calling much of that work "visual poetry" is wrenching the language, but I don't deny its ability to exist as art--that is, an artifact that intentionally produces an emotional response in its observer. Here I use "artifact" as "a man-made work, taken as a whole."

To that end, I have been working for several years on poetic works that, while artifacts in and of themselves, are more properly intended to serve as scripts or libretti (is there a word for the text of a comic book?) for illustrated works.

While I am no illustrator, I have sketched out a storyboard for a work I've sent out to a collaborator for illustration. It is called "The Ballad of Roland Enola Artheaux" and will come in at twenty-two four-panel pages. Below is my unprofessional and rough sketch of the Great Roland.

After this Graphic Poem is completed, I hope to add more. For the moment, enjoy the ugly roughness and be glad I'm outsourcing the illustration. 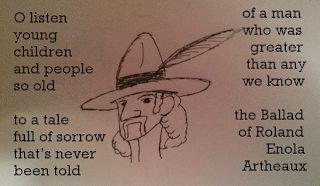